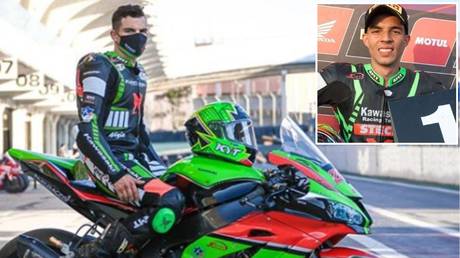 Superbike star Matheus Barbosa, 23, has been killed after he lost control of his Kawasaki bike and collided with metal barriers at the SuperBike Brazil event in Sao Paulo on Sunday.

The tragic accident occurred when Barbosa appeared to struggle to maintain control of his bike after emerging from a left turn and careered straight towards barriers at the edge of the racetrack, colliding with them at high speed.


Barbosa, who was in fourth position in the race at the time of the accident, was pronounced dead at the scene despite receiving near-immediate medical attention. The race was suspended with ten laps remaining following the incident.

“The nearest medical team reached Matheus in less than 60 seconds but despite all their efforts he succumbed to his critical injuries,” a Superbike Brazil spokesperson said.

“The cause of the accident is still being investigated. Out of respect to Matheus, and above all his family, the remaining day’s activities were immediately canceled.

“The competition was being held with all the necessary security conditions established by the appropriate authorities,” they added.

“The organization’s priority at this time is to fully support Matheus’ family.”

Tragic news from Brazil. Matheus Barbosa (age 23) was killed during a Brazilian Superbike championship race at Interlagos on Sunday. The meeting was abandoned. He hit a trackside wall, not the first time this type of accident has happened at Interlagos. pic.twitter.com/BiJiGdlJ8A

Brazilian SBK rider Matheus Barbosa passes away, aged 23 after a crash in the race. Two other riders died in fatal crashes at Interlagos last year.SuperBike Brasil and the circuit need to seriously consider the safety of the championship. https://t.co/DSS4wKrV8r

The fatal crash continues the dark cloud which has been hanging over the Brazilian circuit in recent times. In April 2019 another rider, Mauricio Paludete, also lost his life on the very same track while Danilo Berto was also killed last year after an accident, also at Interlagos.

The latest tragic incident to impact the sport has led to calls to improve the safety for riders amid the mounting fatal crashes Superbike has endured in recent times.