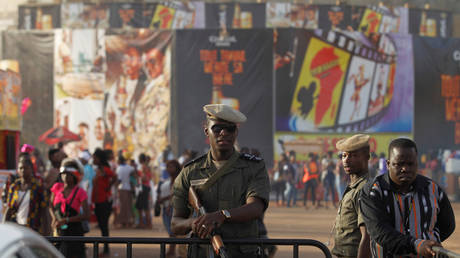 An American was killed by soldiers in Burkina Faso’s capital, Ouagadougou, after apparently being struck by warning shots. The incident occurred a day before the African nation’s presidential election.

According to reports, the US citizen exhibited suspicious behavior while walking in front of a military camp located on the southern outskirts of Ouagadougou. It’s said that he tried to flee after being ordered to halt. Soldiers guarding the camp then fired shots, which hit the individual. The victim was then evacuated to a nearby health facility where he succumbed to his wounds.

A high-ranking Burkinabe security official told AFP that the shooting was a “regrettable accident.” A source at the American Embassy in Burkina Faso confirmed the death to the outlet, without providing further details.

The US State Department has urged Americans against traveling to Burkina Faso due to “Covid-19, terrorism, crime, and kidnapping.”

The incident occurred hours before the West African nation opened polls on Sunday in a presidential election overshadowed by incessant jihadist violence, which has claimed over 2,000 lives this year alone. Instability in the country is expected to prevent hundreds of villages from participating in the electoral contest.

Also on rt.com
US Special Ops secretly active in almost half of Africa, new report reveals, as military touts threat of China & Russia

Second stimulus check: How quickly can the IRS send your payment the next time around?