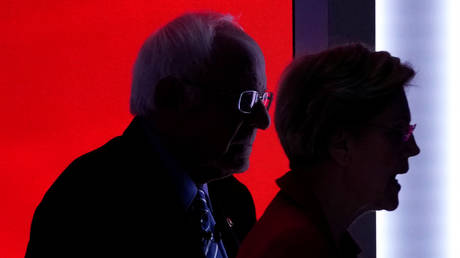 The Biden campaign is reportedly mulling an informal ban on the recruitment of senators to serve in his possible future administration, effectively barring Elizabeth Warren and Bernie Sanders from joining it.

The proposed ban, reported by Axios, would be justified by a necessity to keep as many Senate seats as possible occupied by Democrats to facilitate adoption of legislation. Warren and Sanders both represent states with Republican governors, who would be able to pick their successors, should they vacate their current positions. Biden himself reportedly has not made a decision on the issue yet.

Also on rt.com
Progressive Democrats denounce Biden’s ‘shift to left’ with ‘Bidenomics’ as nothing more than REAGANOMICS


If confirmed, the arrangement is likely to infuriate progressive Democratic voters, who were told they must support the Biden/Harris ticket to vote President Donald Trump out of office and hope that a Biden administration could then be pressured to adopt some of the progressive agenda.

Sanders, who campaigned relentlessly for Biden, is reportedly eyeing the position of Secretary of Labor in the planned Biden administration. Warren, who strategically kept in the primary race long enough to hold back the Sanders candidacy on Super Tuesday and help Biden win the nomination, reportedly wants to head the Treasury.

The rationale for keeping senators where they are is not impeccable, Axios pointed out. The Massachusetts legislature has a Democratic supermajority, which potentially can force Governor Charlie Baker to appoint a Democrat to replace Warren, should she resign. Governor Phil Scott of Vermont last Friday said he was open to picking a left-leaning independent as a replacement for Sanders.

Bidenworld is floating not appointing senators. So no Warren at Treasury/Justice, no Sanders at Labor, no Coons or Murphy at Foggy Bottom, no Duckworth at VA, no Heinrich/Udall at Interior. Unclear what that would mean for ex-sens. (likely Jones) https://t.co/gw53AnJ2ly

An informal ban, if enforced rigidly, would also apply to senators from states with Democrat governors. In that case Chris Coons (Delaware), Tammy Duckworth (Illinois), Amy Klobuchar (Minnesota) and Chris Murphy (Connecticut) would be barred from joining a Biden administration.

The concern for Senate seats obviously didn’t stop Biden from picking Kamala Harris as his running mate, opening her California seat for a new appointee. This may imply that a less strict ban targeting only the two progressive senators is under consideration.

Xbox Series X unboxing: What comes in the box - Video

Small Business With No Emergency Preparedness Plan? You're Heading for Disaster