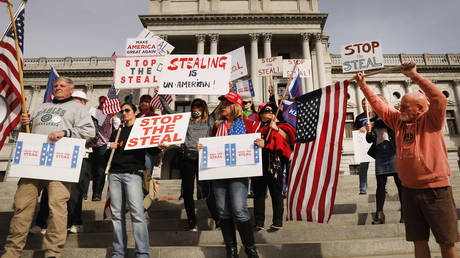 Tens of thousands of people have reacted to new claims that voter fraud was perpetrated during the US presidential election, after a blogger reported that her mother’s maiden name had been used to illegally cast a ballot.

The hashtag #MaidenGate was launched late on Monday to highlight the story of the Donald Trump-supporting blogger ‘Lauren,’ who also goes by the letter ‘L’ online. By Tuesday morning, it had become one of the top American Twitter trends, having prompted tens of thousands of tweets.

The MaidenGate saga began with Lauren’s claim that her mother’s vote had been“stolen in Michigan,” where she used to live, by someone unknown who had used her maiden name to vote there. According to the blogger, her mother had told her about unusual election-related message she had received prior to Election Day. The message seemed curious to both women, as they were apparently falsely implying the mother was going to vote in Michigan.

Lauren also tweeted that her mother had only mentioned the message to her once Election Day was over, but that she now claims to have “evidence,” as yet undisclosed, of a fraudulent vote having been cast.

The incident prompted Lauren to start an awareness campaign urging voters to check their voting data by looking up any previous name they had been known by or any addresses in other states where they had once lived.

Lauren made efforts to draw the attention of a number of prominent conservative personalities to the MaidenGate trend. Some Trump supporters had been alleging voter fraud in the election since the Republican president himself cited it as the reason he was slated to lose it. Trump-supporting pundit Michelle Malkin took up the charge to spread the word about the alleged MaidenGate conspiracy, implying that the pro-Women activist group Supermajority might have been involved in it.

Who is Supermajority & what did they do for Soros? “During the first three months of 2020, progressive donor George Soros donated $2 million towards the PAC.”https://t.co/UG8fS3iIpf

The hashtag also allowed MaidenGaters to start gathering further claims of incidents similar to that alleged by Lauren and her mother.

More than once a Florida number text me about voting. My phone number is not a Florida number and it was addressed to my mom who died in 2014. I have her old number. I don’t believe she ever lived in Florida. pic.twitter.com/zygCCbk1yo

Friend who lives in CA. Got this text and just checked and she’s still registered in Michigan and it shows she requested an absentee but never turned it in. pic.twitter.com/JsDyqgDRuq

I live in PA, registered here and voted here for years. yet a mail-in ballot was sent to my previous NJ address. I checked and it has my NJ voter status as Active aaaaand lists an exact date for when “I” apparently requested a NJ mail-in. also got TONS of random texts

Despite claiming to have proof of massive fraud, Lauren opted not to reveal it, supposedly to avoid“posting people’s private information.”

Not everybody gave in to MaidenGate, with some users calling it a “baseless conspiracy theory,” that had been used to exploit some Americans’ lack of understanding of how intra-state voter registration works.

People already finding out #maidengate is just another baseless conspiracy theory. Just because you are registered doesn’t mean to cast a ballot 🤦🏻‍♂️

So, let me get this straight. A bunch of conspiracy theorists flood social media with imagined scenarios & rumors, offer these tweets & rumors as “proof”, & then it just becomes accepted reality for many over time? How is this rational or sane?#propaganda#maidengate#GOP

Also on rt.com
Government official accused of ‘hating democracy’ for not designating Biden ‘president-elect’ as soon as media called his victory

4 things you should know about Black Friday 2020