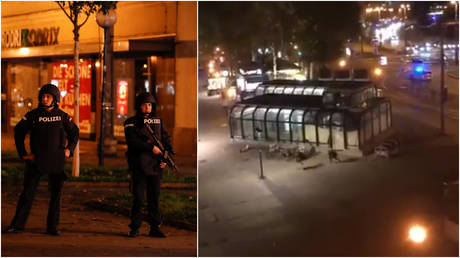 Two Turkish MMA fighters living in Vienna have been saluted for courage and heroism after coming to the aid of a woman and a police officer amid deadly gun battles around the city, labeled a terrorist attack by authorities.

The duo, named in press reports as Mikail Ozen and Recep Gultekin, briefly appeared in viral video footage captured during the shootout on Monday night, in which Ozen is heard shouting “Take cover!” in Turkish as the two sought refuge behind a structure – what appears to be a subway entrance – with a volley of gunfire going off around them.

#Wien#Vienna We just spoke to Mikail Ozen, whose voice can be heard in Turkish in this video and who has helped an injured police officer.He says one of his friends has been injured too, while he and another friend are in healthy condition. https://t.co/VO5MC1JsVL

In addition to the harrowing encounter caught on video – in which Gultekin sustained a small wound to his leg – the two men also reportedly came to the rescue of both a woman and an injured police officer in the area.

“An old woman was heading towards the scene, walking on foot. When we saw the woman, we stopped and went downstairs. We also took that woman to a safe place,” Ozen told Hurriyet, a Turkish news outlet, adding “Then we came to the subway station [seen] in those images. I saw the police shot there.”


At one point during the incident, the gunmen were only about five to six meters away, said Ozen, who hails from Turkish city of Sarikaya but is now a citizen of Austria. He said that the pair went to the police station “immediately” afterwards, adding “We told the cops… about the terrorists. They were wearing something like a white shroud. He had a long-barreled gun.”

Though there was speculation earlier in the night that at least one of the gunmen was heard speaking Turkish during the shootout, that may stem from confusion over the video featuring Ozen. Other footage appears to show one of the assailants speaking Arabic.

Dear followers,some are spreading fake news that one of the attackers in Vienna was speaking Turkish.The man in the video that is seen screaming in Turkish is a boxer and that man tried to help the police officers that got shot but sadly he got shot/wounded also by the terrorist. pic.twitter.com/iPU7lXGI5O

Netizens have celebrated the two men – both believed to be mixed martial artists – for rushing into danger to assist others, with somedubbing them the “heroes of Vienna.”

“These are the heroes of [Vienna]: Recep Tayyip Gultekin and Mikail Ozen. You risked your life and saved the life of a woman and an injured police officer,” another wrote.

It is not always enough to be in the right place at the right time, courage and bravery is also required. Thank you!

Also on rt.com
Do NOT send children to school, Vienna parents told as at least one suspected terrorist is still on the run


The deadly shooting spree began around 8pm local time near the Stadttempel, Vienna’s largest synagogue, which was closed when the gunfire erupted. A shootout with police soon spread to some six different locations around the city, leaving at least two bystanders dead and many more injured. At least one of the gunmen was shot dead, while up to two others remain on the run, according to Interior Minister Karl Nehammer, who urged residents to stay away from the city center as a sweeping manhunt continues.

What Are the So-Called Ghost Offers of Real Estate Investing?