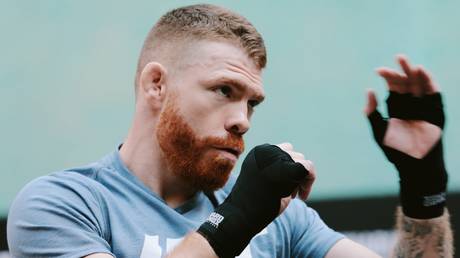 Paul Felder will trade the commentary booth for the octagon this weekend after agreeing to step in for the injured Islam Makhachev on Saturday for a five-round main event against former UFC lightweight champion Rafael dos Anjos.

It didn’t take long for the UFC to locate a short-notice opponent to replace the injured Islam Makhachev in this weekend’s UFC main event fight in Las Vegas – and the promotion didn’t have to look past their commentary team to find him, after longtime 155-pound contender Felder, who was set to the call the fights this weekend, agreed to step in against the dangerous Brazilian fighter.

Also on rt.com
‘Injuries are a part of this game’: Khabib commiserates with Islam Makhachev as injury forces Russian out of maiden UFC main event


In a nod to the sort of shape the Felder keeps himself in, the fight will still take place at 155 pounds, despite “The Irish Dragon” having just five days to make weight, while it is also still scheduled to be a 25-minute featured bout.

“With everything going on in the world, the sad things going on in people’s lives, losing their jobs and suffering. We just lost Alex Trebek to pancreatic cancer,” Felder told ESPN of his decision to step up.

“This is an experiment. We’re gonna see. My brain is fresh, my body is fresh,” Felder added.

“I’m not taking beatings in sparring like I normally do, but I’m still staying technically sharp and very fit.”

Paul Felder taking a five round fight, on five days notice, at 155lbs against the former lightweight champion in RDA, is as gangster as it gets.The UFC.The best.

Paul Felder is really saving the UFC’s ass by stepping in against RDA on such short notice. With him added, this becomes appointment viewing again. Without him, it’s one of those cards you could wait and catch the highlights from at a later date.

Felder last competed in February where he lost a close but fiercely entertaining fight against New Zealand’s Dan Hooker, but before that had won seven of nine – including notable wins against Edson Barboza and Charles Oliveira.

Following the Hooker bout, Felder hinted at retirement, but later clarified his comments to say that he would only accept fights that excite him, and it seems that a high-profile main event against a former world champion is exactly that.

Also on rt.com
Khabib attacks Macron: From rows with rappers to rage over ‘filth’ at the theater, UFC champ has never been shy to voice beliefs


“Any other time, this would have been impossible,” Felder’s manager, Brian Butler, said of his fighter’s decision to take the bout.

“But Paul has been biking and swimming like a mad man. He woke up this morning and his health data says he’s peaking. The universe wanted this to happen.”

Dos Anjos, meanwhile, returns to the lightweight division he once ruled after an eight-fight stint at welterweight which saw him take an elite list of fighters at 170lbs, including Kamaru Usman, Colby Covington and Robbie Lawler.

Second stimulus check: How soon could the IRS send it before the end of 2020?