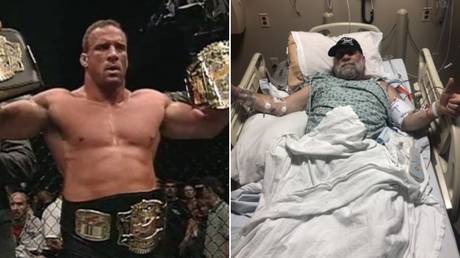 Mixed martial arts legend Mark Coleman, a former opponent of Russian great Fedor Emelianenko, is recovering from a near-fatal heart attack after he drove himself to hospital while suffering from chest and arm pains.

Coleman, 55, revealed the news in an Instagram post and says that doctors discovered a blockage in an artery for which he underwent an emergency procedure to remove it and have a stent inserted.


And as the former UFC heavyweight champion revealed, had he delayed his trip to the hospital it could have been a mistake that he paid for with his life.

“I hadn’t been feeling so well for quite some time. Something hit pretty hard Tuesday about 7 p.m., chest locked up, my arms went numb — sounds pretty obvious but I didn’t want to believe,” Coleman revealed in a social media post.

“I walked around and laid down for about six hours it didn’t get better. I texted my daughters I didn’t want to go, [but it] wasn’t fair to them so I grabbed my keys made it to the hospital for sure there was nothing wrong.

“But yes, there was complete blockage of a major artery.

“If I don’t go, I’m probably not here today. I’m so glad I went, I have so many things I want to do.

“Tomorrow they will try to break through the artery and put a stent in. For the first time in a long time I am motivated. I am [grateful] and appreciate all your support. It wasn’t my time, it’s time to live.”

Coleman is one of the most famous names from the halcyon days of mixed martial arts. A dominant wrestler who parlayed his powerhouse grappling skills to a successful career in the cage, he became known as one of the fighters to popularize ground attacks – becoming known as the “Godfather of Ground & Pound,” such was his influence on the mats.

He made his UFC debut in 1996 and won the organization’s inaugural heavyweight title in 1997 but would lose it in his first defense when he was outpointed by Maurice Smith.

Coleman’s next fight saw him on the receiving end of one of the most famous knockouts in UFC history when he was drilled with a high kick by Pete Williams at UFC 17 in 1998.

Coleman would soon make his debut for the Japanese PRIDE promotion, winning their 2000 open-weight Grand Prix. He would twice lose by armbar to Russian heavyweight great Fedor Emelianenko under the PRIDE banner.


An icon, Coleman has shared the cage or ring with some of the sport’s biggest names like Mirko Cro Cop, Mauricio “Shogun” Rua, Randy Couture and Antonio Rodrigo Nogueira.

His last fight took place in February 2010 where he was submitted in the second round of his UFC 109 clash with fellow vet Couture.