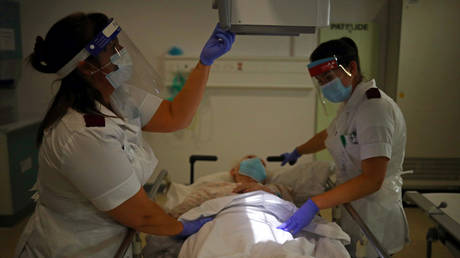 The selection of data has not been based on the current reality, Carl Heneghan, the director of the Center for Evidence-Based Medicine at Oxford University said, in comments published on Monday.

The death forecasts could be four to five times too high, Heneghan insists.

I cannot understand why they have used this data, when there are far more up-to-date forecasts from Cambridge that they could have accessed, which show something very different.

The government’s scientific advisers showed a scenario from Cambridge University at a Downing Street press conference on Saturday, and graphs suggested England could see 4,000 daily deaths early next month. But this data was based on different models from at least three weeks ago, Heneghan and Daniel Howdon of Leeds Institute of Health Sciences explained on Monday.

The Cambridge estimated projection for November 1 is 1,000 deaths, the experts said.

The most recent research from Cambridge forecasts 240 daily deaths for next week, while this figure stands at around 500 in the second half of November.

Also on rt.com
UK’s first ‘Covid-19 border’ in the works as entry into Wales from coronavirus hotspots to be restricted


Two model estimates presented by the government’s Scientific Advisory Group for Emergencies (SAGE) have already proven to be invalid, according to Heneghan and Howdon. They say these analyses need checking to verify whether the lower estimates could reflect the actual data.

Britain’s PM Boris Johnson on Saturday ordered England back into a national lockdown from Thursday morning, until December 2, and the SAGE figures were behind the decision.

“Models of our scientists suggest that, unless we act now, we could see deaths over the winter that are twice as bad or more compared with the first wave,” Johnson is preparing to say on Monday, his office announced.