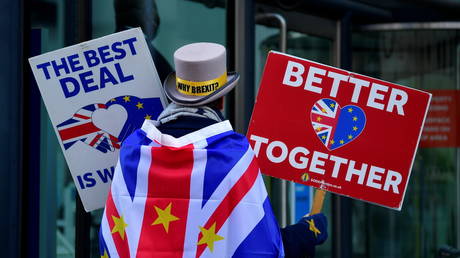 The UK House of Lords has rejected the crucial parts of the bill that would allow London to violate the Brexit withdrawal agreement. The UK government said it will re-introduce these same provisions in the future.

In two rounds of voting, the peers have overwhelmingly voted to strike down the controversial provisions of the hotly-debated Internal Market Bill. The proposed legislation has been stirring up much controversy because it would allow the government to override parts of the UK withdrawal agreement it signed in January.

Speaking before the vote, Lord Michael Howard argued that London would set a “lamentable example” if it were to break international law.

The government led by Prime Minister Boris Johnson has insisted that the bill is aimed at ensuring barrier-free trade between the four constituent parts of the UK, including Northern Ireland, which has a border with the Republic of Ireland, an EU member state.

Also on rt.com
UK is open to ‘sensible compromise’ on fishing – environment minister


Despite the defeat in the House of Lords, the government led by Prime Minister Boris Johnson pledged to “re-table” the rejected provisions once the bill returns to the Parliament’s lower chamber, the House of Commons.

“We’ve been consistently clear that the clauses represent a legal safety net to protect the integrity of the UK’s internal market and the huge gains of the peace process [in Northern Ireland],” a government spokesperson told the media.

It’s for UK Parl to legislate as it sees fit. But understand, if UK passes law designed to break International Law, WI & Protocol, then there will be no trade deal. EU cannot ratify a new deal while U.K. is legislating to break a previous agreement. Trust & Good Faith Matters. https://t.co/OyS0Qw2csf

Brussels has sharply protested against the Internal Market Bill, with European Commission Vice President Maros Sefcovic saying it violated both “the letter and the spirit” of the withdrawal agreement. On Monday, Irish Foreign Minister Simon Coveney warned that there will be no trade deal between the UK and the EU if London adopts a bill “designed to break international law.”

Second stimulus check: How soon could the IRS send it before the end of 2020?