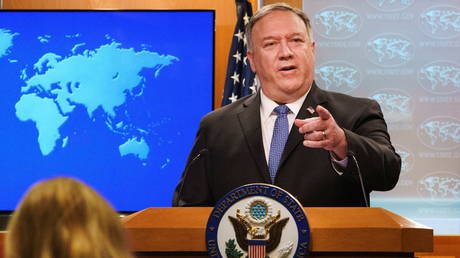 The State Department is committed to a smooth transition… to a second Trump administration, US Secretary of State Mike Pompeo told reporters, drawing howls of outrage from Democrats and the media.

Though Democrats declared victory and the mainstream media have acclaimed Joe Biden president-elect, Pompeo shrugged off pressure to work with Biden’s transition team at a briefing on Wednesday.

“At what point does a delay hamper a smooth transition that poses a risk to national security,” he was asked by a reporter.

“There will be a smooth transition…to a second Trump administration,” Pompeo replied with a smile.

The secretary of state insisted that every legal vote should be counted – the Trump administration’s official position as it questions preliminary results from several states – and that the electoral process is far from over.

“The United States has an election system that is laid out deeply in our Constitution. And we’re going to make sure that we get that right,” Pompeo added.

Biden supporters were not amused, however. Congressman Joaquin Castro (D-Texas) accused Pompeo of “undermining the rule of law and democracy here at home and around the world,” declaring that the “election is over” and that Trump lost.

Former MSNBC anchor turned YouTube commentator Keith Olbermann – who has labeled Trump a terrorist and compared him to Hitler – has called for Pompeo’s arrest.

Actor and Resistance activist John Cusack, meanwhile, described Pompeo as someone who champions “white nationalist Christian ethno-state fascism” and “the kind of man who would make snuff films of drowning cats.”

US election results have yet to be certified, and the Trump campaign has fired off a flurry of legal challenges. Meanwhile, the mainstream media insists that all of Trump’s complaints are “baseless,” while Democrats maintain that anything short of accepting a Biden victory is an attack on democracy itself.

MacOS Big Sur: Find out if your Mac is compatible with Apple's new operating system