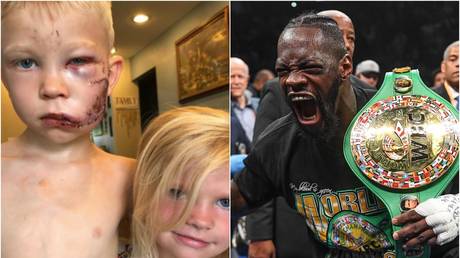 The World Boxing Council have created a new ‘bridgerweight’ class between the cruiserweight and heavyweight divisions, named after a little boy whose face was mangled when he saved his younger sister from a dog attack.

Bridger Walker, then aged only six, required 90 stitches to his cheek after being bitten in the face when defending his little sister from an onrushing dog in July.

When asked why he committed such a selfless act, the boy answered with the heartbreaking words: “if someone had to die, I thought it should be me.”

Also on rt.com
‘If someone had to die it should be me’: Heroic 6yo boy bitten IN FACE by dog while shielding sister named honorary World Champ


A picture of Bridger hugging his grateful sibling while wearing the prominent, deep scars on his face, went viral and came to the attention of the ruling body, who named Bridger their ‘honorary world champion’ and presented him with his own belt.

Now, after gathering a think tank to create a new boxing weight class, the WBC have named the new division ‘bridgerweight’ to honor the young hero.

Despite the sentiment of its name, the new division has been met with derision by boxing fans and purists, who have accused the WBC of simply adding to the unwelcome ‘alphabet soup’ of boxing belts already in boxing.

Not long ago, the organization came under fire for creating illogical ‘franchise champions’, a title which could not be won or lost in the ring. Vasyl Lomachenko and Saul ‘Canelo’ Alvarez were among those chosen to bear that particular trinket.

In 2018, Wilder, who has seen a potential trilogy with Tyson Fury collapse, mooted the idea of moving down to conquer the cruiserweight “just for fun” and to enter the history books as the first fighter to go down in weight to do so.

QAnon: Here's what you need to know about this crazy, pro-Trump conspiracy theory