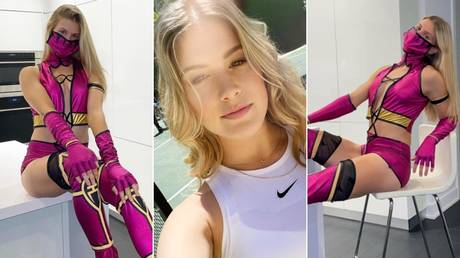 Eugenie Bouchard is already blessed with a huge social media following, but that group only grew in size after she shared photos of her choice of Halloween costume, as she dressed as “Mortal Kombat” character Mileena.

Bouchard donned the revealing costume and posed for a pair of snaps in her kitchen for her latest Instagram post, accompanying the pics with a cheeky caption, “Who wants to play?”

As you might expect, the Canadian was inundated with positive replies, including one, who posted, “Let’s play. I’ll even let you win.”

Another praised her outfit, saying, “I knew you’d surpass yourself again this year, Halloween queen.”

Bouchard was home alone for Halloween, with her current boyfriend, Pittsburgh Steelers backup quarterback Mason Rudolph, at work with his team as they got set for Sunday’s win over the Baltimore Ravens.

The arrival of another rival in the Steelers’ quarterback room may bring a certain additional pressure, but that awkwardness was heightened by the fact that both men have previously been romantically linked to “The Batchelor” starlet Hannah Ann Sluss.

WatchOS 7: All the new tricks your Apple Watch can do now

Real Estate Investing in the Time of Covid