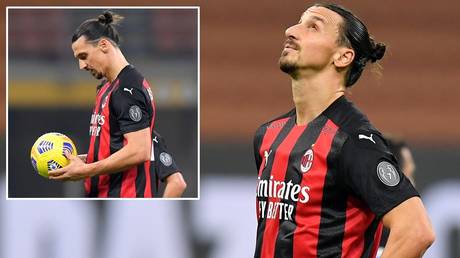 Zlatan Ibrahimovic said that he may step back from penalty kick duties for AC Milan after missing his third spot-kick of the season.

Ibrahimovic scored the crucial equalizer in stoppage time to spare his, and Milan’s, blushes in a 2-2 draw with Verona on Sunday, but it could have been much better for the Swedish hitman, who spurned a golden opportunity from the penalty spot.

The 39-year-old striker blazed his 66th-minute spot-kick over the crossbar, but made amends with a stoppage-time header after Milan had seen a goal wiped out by VAR.

Ibrahimovic’s equalizer partly made up for his earlier miss, but after the game he made no secret of his frustration with himself.

Also on rt.com
‘Long time no see’: Zlatan Ibrahimovic teases international COMEBACK at the age of 39


And the striker suggested that he may cede his position as the team’s designated penalty taker to Milan’s former spot-kick specialist Franck Kessie, who had scored nine out of 10 penalties before duties passed to Ibrahimovic following the Swedish striker’s arrival in January.

“It’s obvious I’m angry, a draw today is not good, we had a lot of chances and I also missed the penalty,” he said.

As he stepped up to place the ball on the spot, Verona goalkeeper Marco Silvestri shouted out loud, “He’s missed the last one!” and the Swede admitted the keeper was spot-on about his spot-kick record.

“He’s not wrong, I did miss the last one,” said Ibrahimovic, who said he needed to rest from a busy recent schedule.

“I need a rest. I didn’t have the sharpness and usual determination I have in front of goal. I just felt like I wasn’t all there,” he said.

Three 30m asteroids headed this way, but ‘planet-killer’ Bennu may be hollow & spinning itself to DEATH — NY Pilot World News

Welsh government ends firebreak lockdown, even as Covid pandemic cause of concern in many areas — NY Pilot UK News